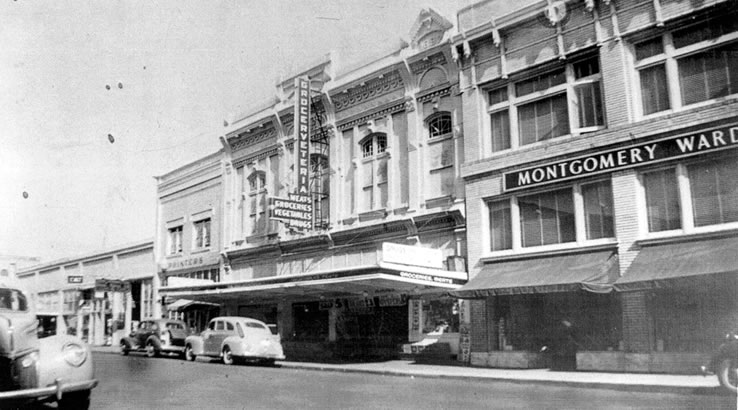 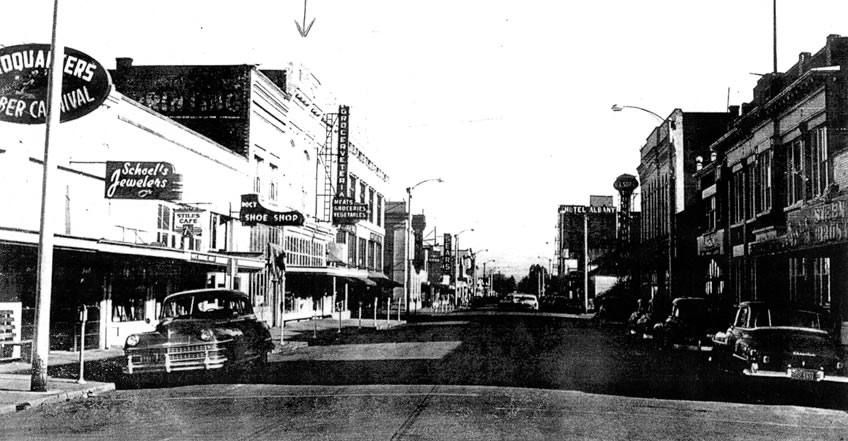 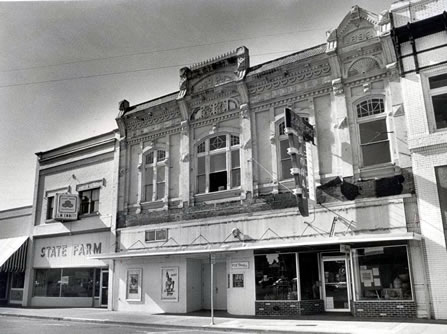 Pix Theatre and Lovelace Floral just before they put up the weather protection.
Notice the removal of the structure in comparison to the above grocery store photo.
It was removed to make room for the weater protection. Too bad. 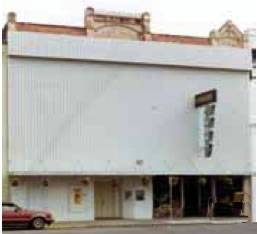 Pix Theatre and Lovelace Floral 1970's with weater protection.
Later it was removed during a building revitalization. 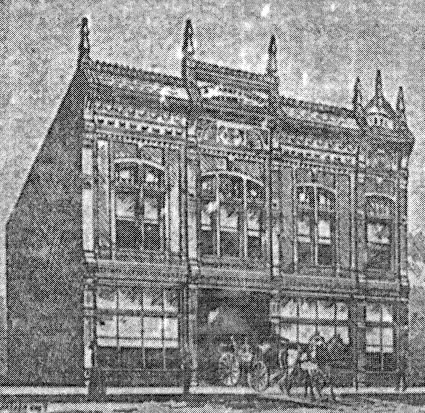 Horses Boarded by Day, Week or Month. Best of care taken of boarding horses.
Transferring from Depots and Hotels, or anywhere in the city or county.

Cabs and Coupes for Fine Driving 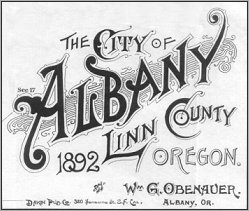 The Straney-Moore Livery Stable was in the basement, which had a ramp access and grooved cement floors to keep the horses from slipping.

Until recently the rings for securing horses were still visible. The upper floors were used for a grocery store, farm supply and storage.

The date and original stained glass are visible on the front and iron hinges for the shutters on the back. When Sam Frager purchased the building the stalls were still intact.

In the loft area, the pulley system is visible that was used to open the upper windows from below. The 9 foot front doors were used for the horse and carriage access. These doors are still intact in the storage area of the loft.

The Straney & Moore's Livery Stable building is one of the finest examples of Queen Anne commercial architecture in the City of Albany.

Built as a livery stable in 1892, "...it was equivalent to Hertz--renting horses for visiting salesman." The large basement was used for horses; the first floor was used for display of carriages; and the second floor was believed to be a storage area. It was the most elaboarte of the four livery stables in town and was located near the blacksmith shop of Johnson Franklin.

However, in 1892, Albany's mode of transportation was drifting away from the horse and carriage. In about 1880 the bicycle became a popular vehicle and by 1902 an Albany man built the first automobile in the State of Oregon.

By 1902, Alvin Straney and W.L. Moore moved from Albany, and Stewart & Sox Hardware Co. moved into the building. They sold farm machinery, guns and ammunition, hardware, tinware and paint. By 1905, they were also carrying Plano & Deering Binders and Mowers, Studebaker wagons, hacks and buggies, sporting goods and White sewing machines. They had formed their business in 1886 and moved from the northwest corner of First and Ferry.

Mr. Charles Hall Steward was a prominent man of Albany. He married Cora J. Irvine, Daughter of S.G. Irvine, minister and one of the founders of the United Presbyterian Church. He purchased an interest in the States Rights Democrat in 1874 and retained it until 1876. In 1883-1884 he was a County Clerk, in 1892 he was a City Council member, and in 1905 he was a County Judge.

Mr. Edward F. Sox was one of the first professors at Albany College, a Presbyterian College formed in 1867. He taught mathematics from 1872-1875. He married Weltha Young, one of his students and a member of the first class to graduate from the College. Her brother was S.E. Young, a well-known and successful businessman in Albany. Mr. Sox came from Illinois and lived for a time in Seattle. His son, Carleton Edward Sox, was also a professor at Albany College in 1925 and taught Business Law. Carleton remained in Albany and became a prominent attorney.

Later, in the late 1960's to early 1980's, the left side of the Livery Stable/Department Store turned into the Pix Theatre. When it closed in the early 80's it became a liquor store and other retail spaces, while the right side was the Lovelace Flower Shop.

The Pix Theatre is re-born utilizing the entire building, with the right side being the lobby and concession, and the left side being the auditorium and restrooms. The only thing original about the theatre is the sloped wood floor and the name. Otherwise it is all new.

It is a first-run movie theatre with 200 seats, that offers a unique atmosphere and venues.